One never get enough room for stowage, and the long shelves in the f'castle was just filling up with paperbacks, magazines and other rubbish - in spite of the size, the shelves were more than 5 m in total.

The rim of the shelf were cut away where the locker was supposed to be, and the cutaway part will later be part of new shelves in the galley and on the side of the lockers.

An incredible amount of measurements and odd angles had to tally in order for the perfect fit, and not to speak of all the milling..

White Sikaflex was used to seal the opening between underside of the deck and the frame.

The most exiting part was the mounting of the frames and the sidewalls. On the back of the sidewall, holes were made to fit to screws set in the plywood reinforcement, an fastened with thick epoxy. This had to be done in parallel on both sides, and at the same time as the frame were glued/screwed into place.

The epoxy hardens after 15-20 minutes, so there were a certain amount of stress during this operation, but to the right you can see the result.

The dividers were mounted afterwards an fastened the same way as the sidewalls.

One does not get younger as the years pass by and the demand for a comfy night is steadily growing. The first step was to get some springy bed slats, that also increases the ventilation of the bedstraws.

Adjusting the slats and fitting them are quite easy - cut them to measure with a saw, and then tread the rubber feet and rubber bands on the slats.

The rubber bands makes it easy to roll up the slats for access to the stowage  rooms below.

The extra latex mattress was bought at IKEA in Poland and cut to sixe with a bread knife. In Helsinki the mattress cover was put together 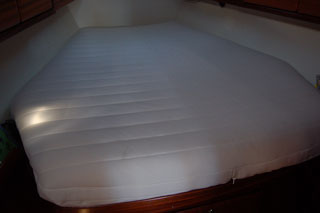 The end result - most of the work was opening about 16 meters of seams before it could be cut and sew it together again.

The faithful onboard sewing machine at work again!

shelf by the chart table

Start out with some mahogany...

plane it to achieve the correct thickness, mill it a bit, glue it together ,stain it, put some lacquer on and voila !

Then mount it with screws from the other side of the bulkhead. Clear silicone where used when mounting, which conceals very effectively the small unevenness in the contact surfaces between the bulkhead and the shelf.

muddle drawer in the chart table

This was the first thing I missed in "Welkin", my previous boat had 3 of them! This became one of the priority one projects!

The drawer is made out of cheap plywood (Meranti) and is stained twice with with International's Mahogany Interstain, before finished off with Hempels's Marine urethane alkyd varnish.

Did I mention that the colour and glow becomes just like mahogany?

The shelf railings are mounted on wooden block that is fastened with glue and screws to the sidewalls of the locker.

The shelf railings is available at Clas Ohlsson.

extra shelf in the galley

Below the sink and the original drawer were a cupboard that was practically useless - no depth at the bottom to place anything at all there, and deep and fine at the top!

The shelf is made of plywood (Meranti), which rests on 2 lists. The rim is made out of mahogany and has a groove milled for fastening it to the plywood.

extra drawer in the galley

The original drawer in the galley has a limited depth an length, due to the sink and the fittings, so a new drawer was needed for the cooks knife and other larger utensils.

This drawer is, like the one in the chart table made out of the cheapest available plywood (Meranti) and is stained twice with International's Mahogany Interstain, before finished off with Hempels's Marine urethane alkyd varnish.  The colour and glow becomes just like mahogany.

The joining method used on the drawer is simply urethane glue and stainless steel screws. A shallow notch was made in the front and back to increase the stability.

The sliding rails for the drawer (from  Clas Ohlsson) is on the left hand side fastened in a piece of plywood, which again is fastened to the underside of the top, by the means of a couple of  wooden blocks.

On the right hand side, the rails are fastened to a wooden list, which again is fastened to the divider between the cupboards.

The sinks in the galley can be useful for many purposes; they can be storage for cutting boards, they can provide extra working space, and properly equipped they will in addition be a nice hiding-place for dirty dishes that the galley-boy doesn't have the energy to clean before departure!

A pattern was cut out of cardboard.

Saw, planer and miller were used to form the covers.

The raw materials (massive birch wood cutting board) were procured at IKEA.

After the final sanding, the covers were treated with olive oil.

Olive oil should be used for treatment a couple of times during the season.

I had a hard time finding a suitable place for speakers, I didn't want black boxes hanging on the bulkhead nor to make big holes in lockers or panels.

Some unused space blow the bookshelf became the solution.

Two mahogany plywood pieces were cut according to templates made out of cardboard. The corner fillets were really fun to mill, with no straight angels, two inside notches for the plywood and three corner to be round off. After staining and two layers of lacquer, all of it were put together with brown silicone,

The cables for the speakers were pulled through holes in the bottom of the shelf and along the side of the hull to the  cd/mp3player & radio/M/FM).

The result didn't turn out that bad and with a remote control I don't even have to get out of the sofa !

White, form-cast polyester with anti-skid pattern is neither good to stand on, nor easy to keep clean, and since I neither have access to cheap teak, nor possesses a cam milling machine, I contacted  Tischlerei Kurt Behn who has specialized in wooden details for boats. He had all the necessary measurements and the result you can see below.

A weather station gives useful information about how lows are developing!

Start out with a piece of  mahogany, round the edges with a router and make holes with a suitable hole saw.

Then comes sanding, staining and varnish.

The instruments were a bargain at Clas Ohlson , and fastened by silicone!

The whole matter were fastened ( again with silicone) and held in place by some masking tape. Take care that the barometer and the hygrometer gets enough air, make a groove on the back and make sure not to seal it off with the silicone.