Oslo welcomes us with rain and fog - so leaving for the Mediterranean was not difficult.. 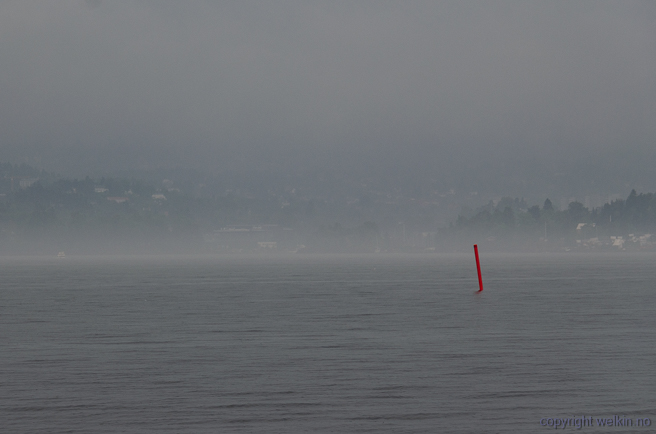 Not much wind to sail on today, but at last the captain could finish polishing the deck! 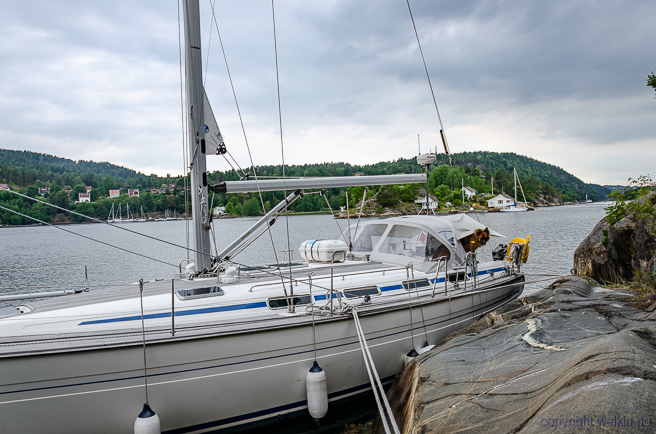 A short sail today, to a popular anchorage in the Oslo fjord. We managed to find a place to lie alongside and the dogs were happy for the easy access, but there was too many cottages on land for a proper hike. 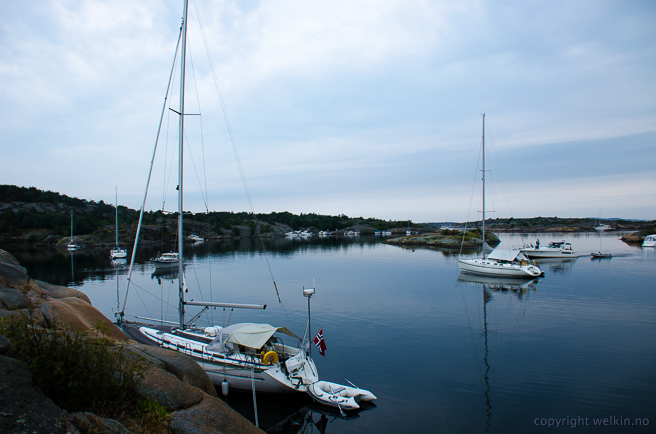 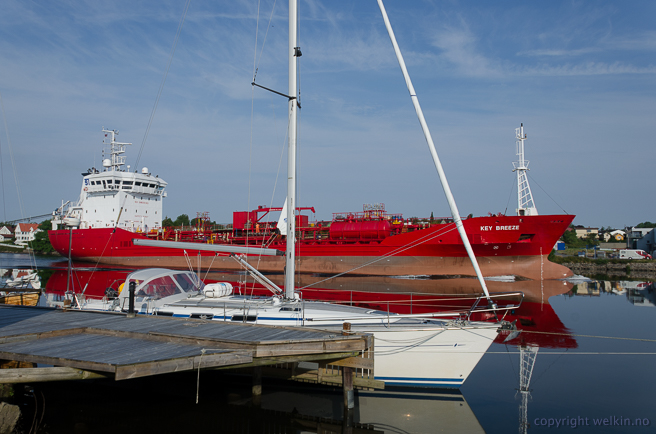 Quiet morning in the river Gomma, the almost 100m long oil/chemical tanker is in fact making less waves than many of the leisure boats that is passing.

The river is Norway's longest (623.8km) and can be navigated by ocean-going vessels up to Sarpsborg.

To the right is a peculiar design we spotted while passing Fredrikstad. 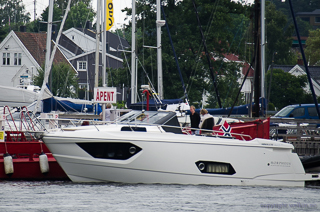 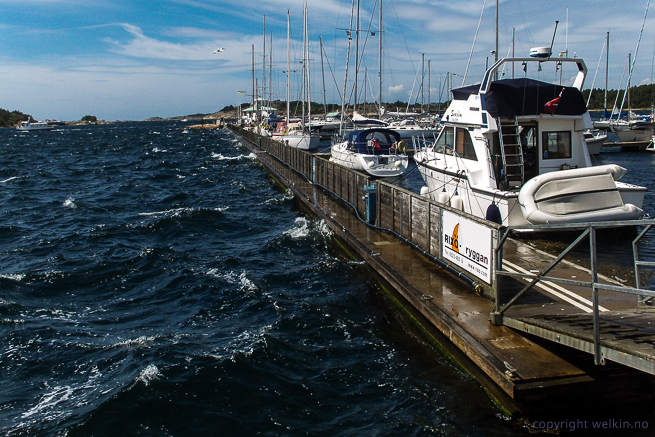 Woke up early this morning because of the forecasted gale. We had a safe harbour, but we had to go to Strömstad to take the dogs to the vet. Arriving in the harbour it was difficult to find a berth for the boat - selfish boaters were lying too far apart and often occupied more than twice the space they needed! We wondered if there were a harbourmaster at all here?

We finally found a space a bit to short, so our boat is now overhanging the pier about 2m. Arriving with 15m/s side wind we were surprised to see the crews of the neighbour boats just watching us from their boat without offering a hand?!? The outer guest harbour in Strömstad is not to be recommended in strong winds, as there are no proper wave breakers and its hard to get on land without being sprayed completely wet!

On top of this a German boat "Gotland IV" from Warnemünde didn't want to move 2m to give us space. Where is the seamanship these days! 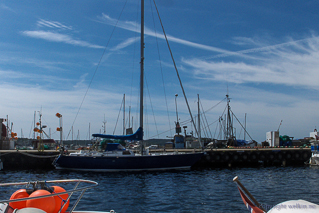 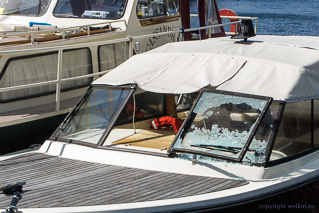 The gale set its marks also in the sheltered harbour of Strömstad! 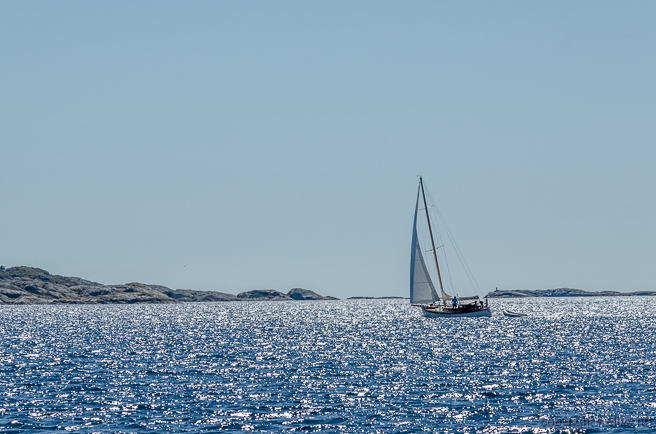 Lovely sailing today - just reaching along in a soldiers wind..

After casting off, we motored through Sotenkanalen, here we are waiting for the swing bridge to open. 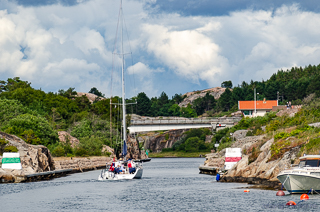 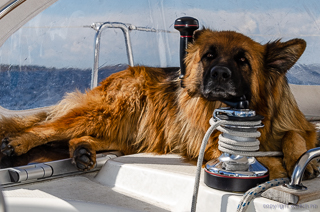 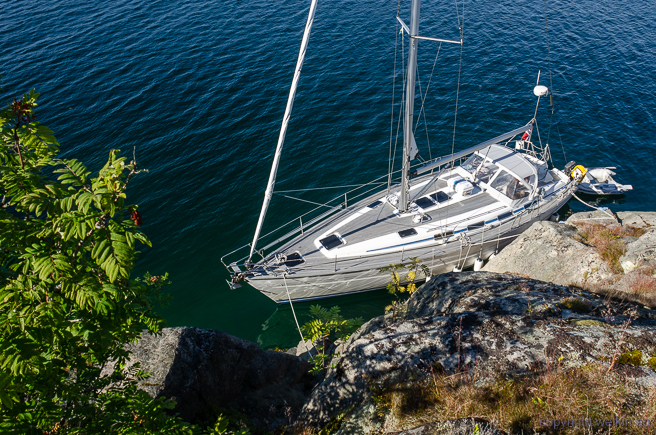 Sailing up the Kosterfjord just before the fairlead into Strømstad, we took a turn east to one of our secret harbours by Galtryggen. 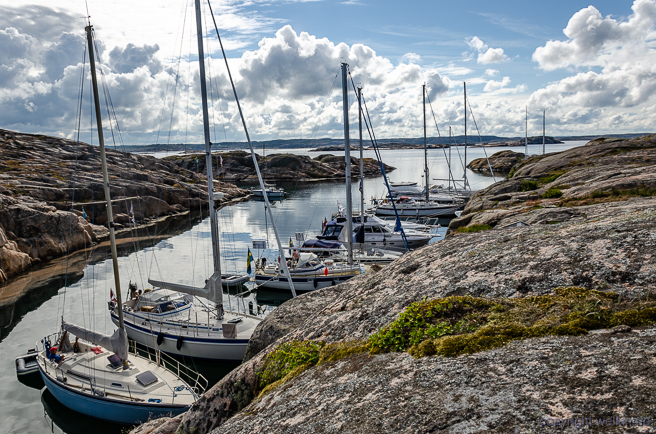 Hamnholmen is a popular harbour just inside Väderöarna, our boat is number 11 from left

No, this are not raindrops, but tiny fish... 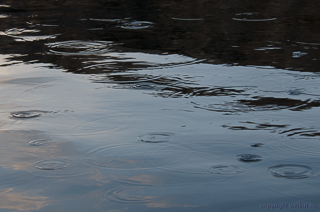 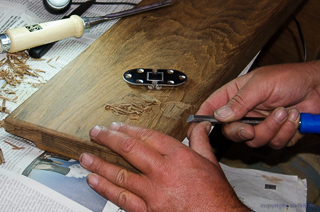 Always some work to be done on board! 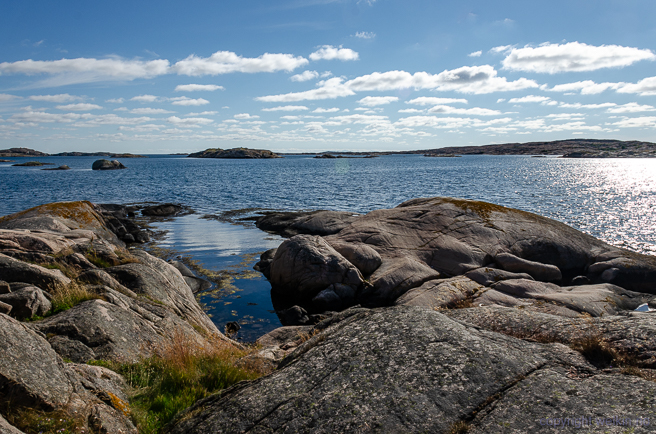 Entering the beautiful untouched skerries of the west coast and finding a warm rock to sit on and just enjoy the views is what the Scandinavian summer is all about! 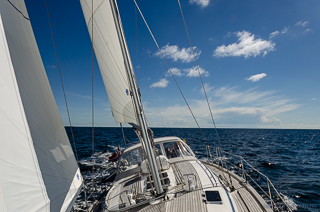 We left the archipelago to enjoy the open waters and make some distance northbound. 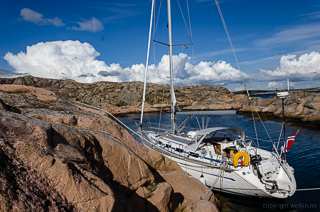 Another harbour called Rammen, well protected and with a narrow entrance. 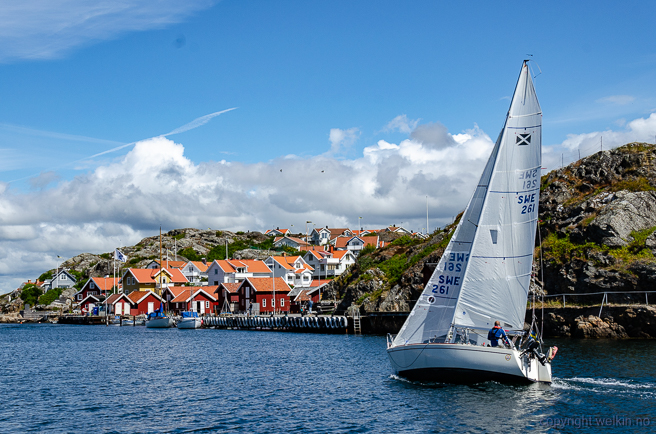 Sailing in the picturesque Kyrkosundet. 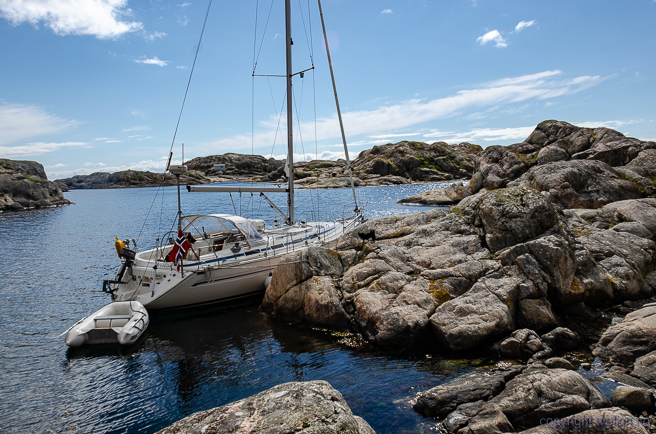 Sailing the charming narrow fairleads of the archipelago today to our next harbour just outside Skjærhamn. Alongside a rock we could easily let the dogs on land, but when they started hunting the sheep on the island, they were called back and tied up!

Below; an unfortunate sailor aground in the narrow fairlead, is being pulled by a halyard to get off again. Right; Skjærhamn 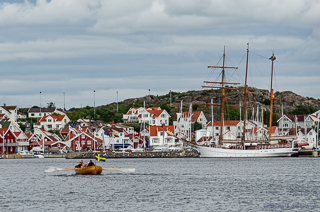 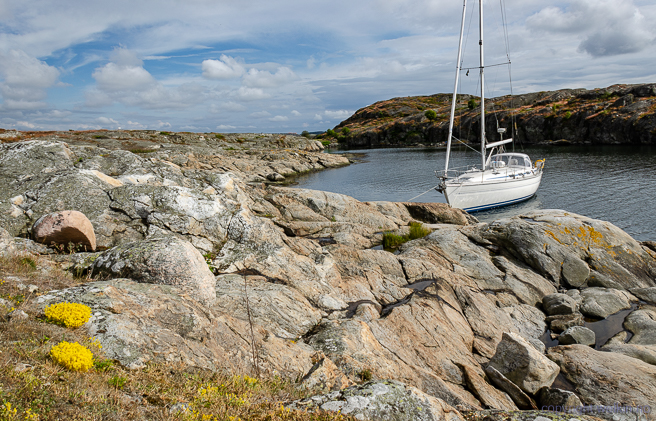 The weather forecast fooled us again - The S 4-8m/s that should bring us across Kattegat to Sweden - never appeared - so most of the leg was on engine -again!

At least we could anchor alone in a nice bay, well almost - during the evening 5 more boats arrived.

Our first encounter with the locals (right) where  a cormorant, a seagull and  a seal.

At midday we sailed along the island of Læsø and as one can see of the picture above, its topography is not really impressive...

The reason to sail to Vesterø is that there one can buy fresh Norwegian lobster tails for €18 per kilo (€50-60 per kilo is a more normal price), so we bought a kilo!

And did we enjoy it! 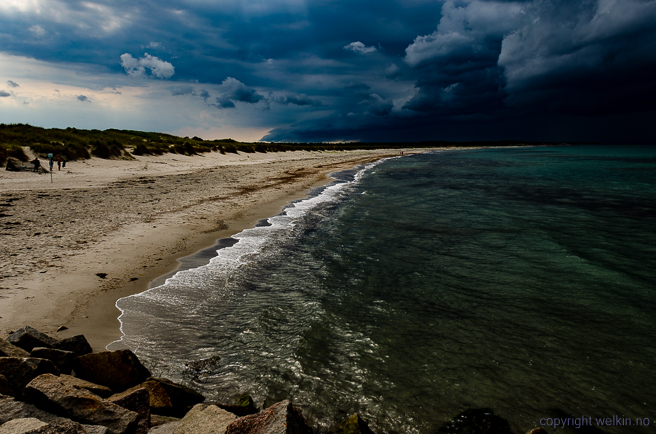 The weather is still very unstable, but this afternoon we were only hit by the outskirts of this squall.

We managed to find a place alongside, but, the harbour in Østerby was quite full, as it is closer both to Skagen and the Swedish west coast. 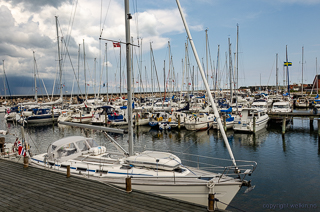 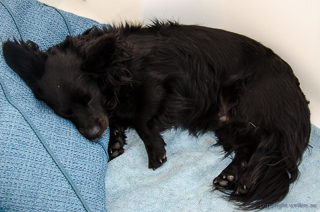 I must say, that after addressing the captain on the issue on comfort, things have drastically improved! 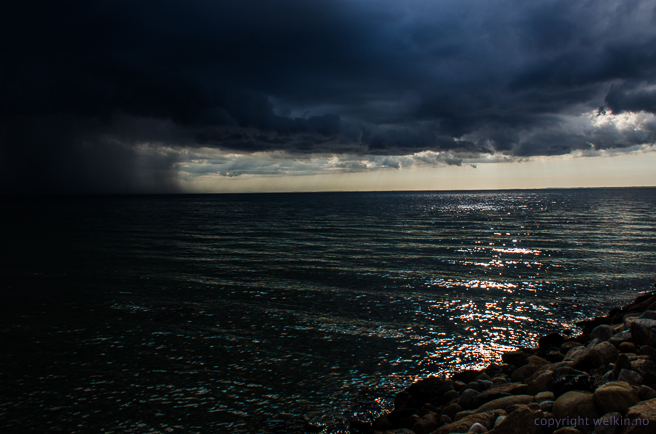 A squall is approaching - luckily we were already tied up and had the canopy up - nevertheless, when the squall hit with gale force wind, every thing under the canopy got wet and even pea sized hail accumulated in the cockpit.

An hour later the sun got out again, and we could enjoy the afternoon in the calm city of Vesterø and take a stroll with the dogs on the long sandy beaches of Læsø. 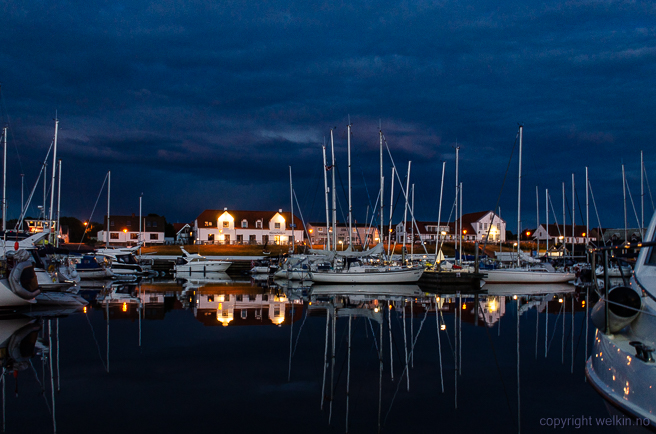