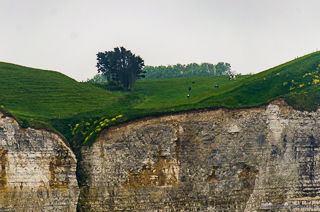 Passing one of the hanging gardens of Eden at Vattetot-sur-mer!

Passing the harbour of Fecamp we were finally able to set the sails and start trying to escape the steadily increasing current against us.

We sailed close to the shore to beat the current and were able to enjoy the scenery up close.

To the right; Aiguille de Beval, a rock soaring more than 50m over the water. 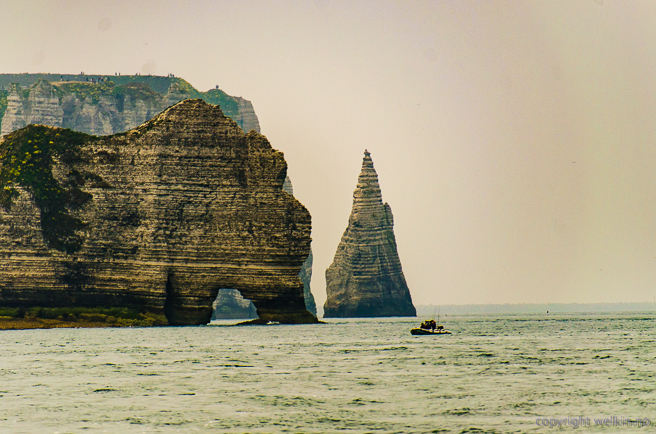 Outside the city of Etretat we admired the rock formations; Porte D'Amont and L'Aiguill.

After Cap d'Antifer ther is a VLCC harbour Le Havre-Antifer, with a breakwater going 2nm out from the coastline. According to our pilot guide we must go another 4nm outside that again before we can cross the fairway, so the captain radioed the port control for permission to cross close to the breakwater. We got OK and spared us a couple hours detour!

The approach of Le Havre looked very promising: an area with wind and kite surfers, a regatta going on. Sailing seems to be appreciated here, so we thought.

In the harbour office we received however quite some shock:  they wanted 45€ for the night (meaning 2-3 times the price we used to pay in Germany and the Netherlandss). The town was pretty boring and in our opinion not worth visiting. 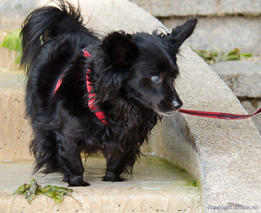 My feet are getting wet -  get me out of here at once! 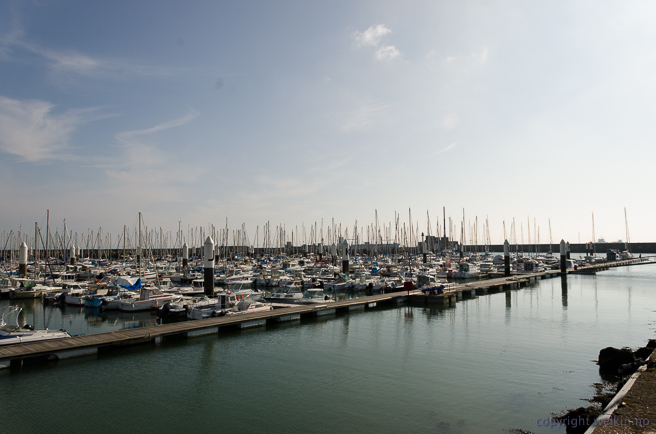 The marina at Le Havre is quite big, this is the southern part, where the guest berths are (at the far end). The northern part is just as big. 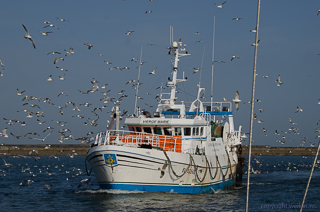 Leaving the harbour we met F/V Vierge Marie, which apparently got a nice catch last night.

Favourable winds today and we sailed nicely among the fishing boats along the impressive coastline of France which was featuring today turquoise waters with colourful cliffs in the background for many miles .

It was one of the best sailing days we had so far: good wind, little waves and it was not completely cold (but also not warm!).

There were not many sailing boats out, so in comparison with the North Sea and the western part of the Baltic Sea, not too much is going on here. 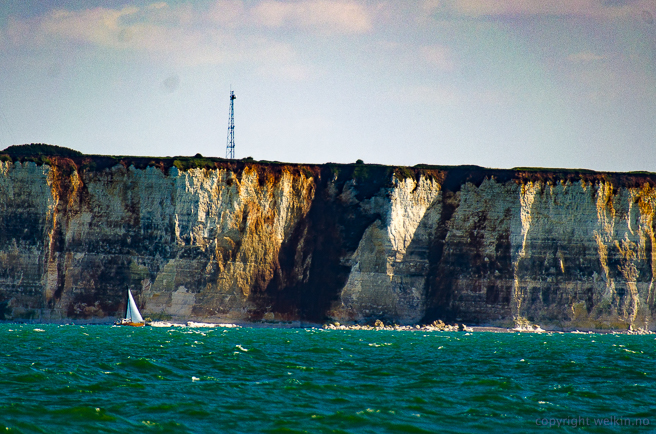 The cliffs of Normandy are quite impressive 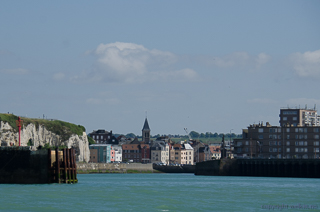 Entering the harbour at Dieppe

When entering the harbour one of the harbourmasters of Dieppe was at hand to assign us a place. The harbour fee here was ca. 26 € and included everything.

A Carrefour City shop was in walking distance from the harbour.

Dieppe has every thing you could wish for in a French city; Patisserie for the first mate, old churches and houses and of course cafés and bars for the captain.

The only thing missing was a nice area for the dogs. 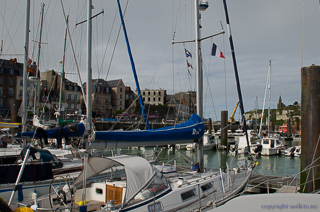 The guest harbour in Dieppe

Today we sailed through the Strait of Dover.

The White Cliffs of Dover in the distance

This is our first time in this area and we were surprised, how close England is to France. It seems, that you can just jump over.

In the town square we had a drink in the sun

After a drink in the town square we started a sight seeing tour. The old town is a short distance away and worth a visit (and so are the French patisseries!). Unfortunately the state of many of the old buildings is poor. It seems to be an impossible task to maintain so many historic sites. 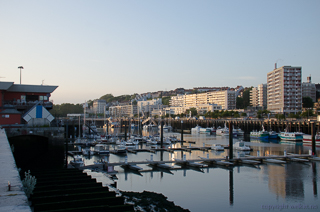 The Boulonaisse harbour at low water

The harbour fee was 28.55 € and therefore the most expensive up until now. Water, electricity, internet and shower were included. 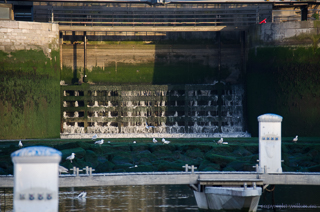 The captain hoped that the locks normally leaked and were not about to break! 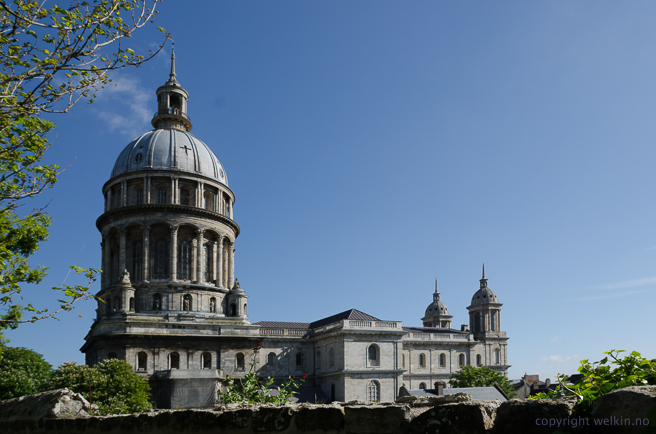 The French has always had a liking for the Grandeur! This is the new castle placed in front of the old one. 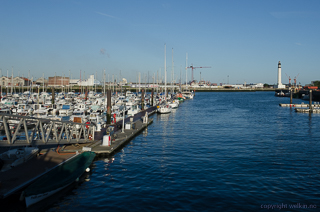 We arrived in rain and once it passed had a stroll though the city, to the tourist office and a supermarket, where we had to find out, that shopping in France is not exactly cheap.

The place seems to have some WWII-history, which makes me wonder - as usual - why there are so many places which only focus on these particular 6 years, as if all the other hundreds of year are lacking any importance. And we found a nice spot for the dogs to run free.

One should not assume, that all the British flags here indicate, that the French here know how to speak English.

The harbour fee was around 26€ and included electricity, water an shower. As the shower cabins were warm (which has not been the case in other harbours), we made use of it.

The internet did not reach to the harbour - coverage was only in the shower!? 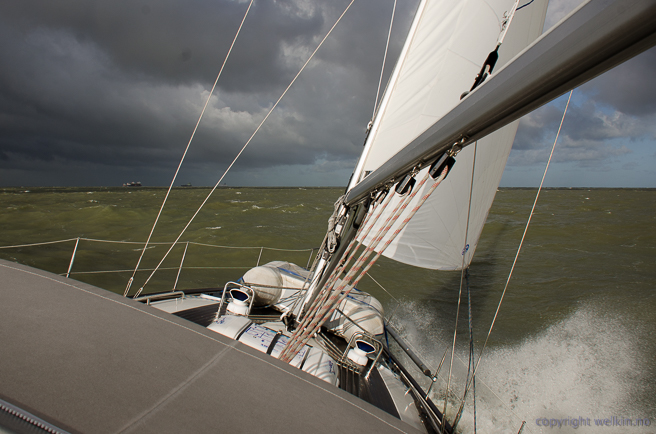 A squall approaching outside Zeebrugge.

Left at 05:00 to catch the current out, but it took us another 45 minutes to get out of the locks. 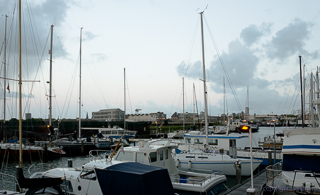 We hoped to do a longer leg today, but the wind and the waves against the 2kts current made our journey quite uncomfortable, so we opted for Zeebrugge after only 4 hours in this tumbler.

Zeebrugge is not a very exiting town we concluded after a walk through the city. The harbour is large and modern, full with big boats. I doubt that their owners are living in Zeebrugge. The fee was 34€, including water, shower and internet. Electricity was charged at 1€/6kWh (a third of the price we had to pay in some of the harbours in Germany!).

Again, the weather was horrible! 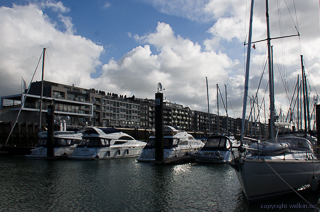 Gale warning again and wind from the wrong direction and being tired from yesterdays sailing made us spend the day in Vlissingen - shopping and walking around in the city. We actually hoped to be able to take the boat out of the water and put on some antifouling, but there was no free slot for us.

The cold and rainy weather starts to wear us down. 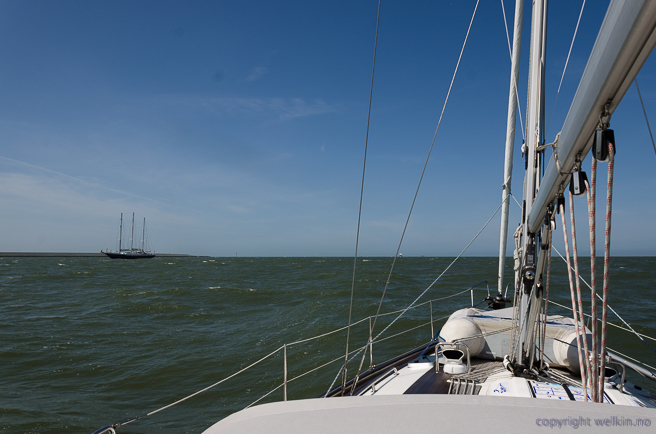 Finally out in the open waters again!

The plan for today was to leave early and get to Oosterschelde. It did not work out: In order to leave early, one has to get up early first.  And when we arrived at the Roompotsluis lock, we discovered a most annoying bridge, which the first mate has overlooked when selecting this destination. So, late off today - motoring down the busy Rotte river at 10kts - dealing with the Maas Approach in order to cross the Mass TSS, but eventually we were in open waters and could finally set sails again.

Nice sailing, but tacking against the current made our progress slow and in the end we motored the last 20nm from Roompotsluis up the run to Vlissingen in the dark of the night.

We got through the locks just before midnight and were well into the next day before we were tied up in the Schelde guest harbour and could  turn in. 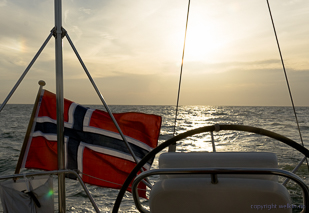 Celebrating 17th of May - the Norwegian constitution day! 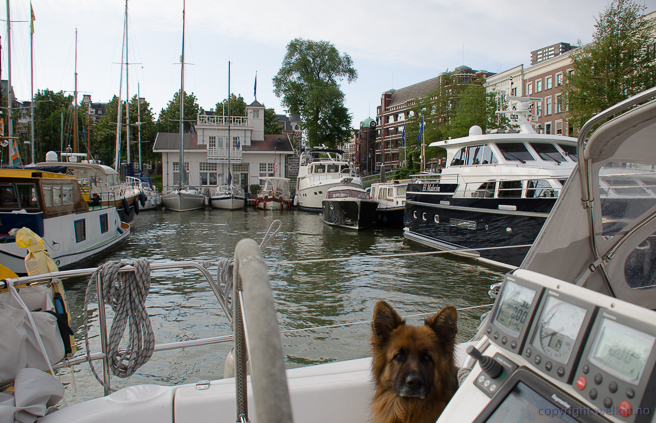 In Veerhafen in the centre of Rotterdam

The harbour here was quite crowded and our place was not exactly quite. The fee was 28€, water and internet included. Electricity was charged extra. We did some laundry, as this was a real bargain: 2.50€ each for washing and drying machine.
The city itself is completely different from Amsterdam: modern and business-like with the extensive Europort nearby, and lacking the charm of Amsterdam or Haarlem. Accordingly it was missing the tourist masses and had instead the business travellers. 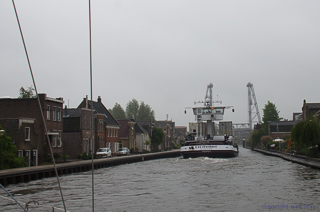 We couldn't pass this slow boat..

Already at the first locks we got a slow moving barge in front of us, and couldn't pass him for quite some hours. We spent the time looking at all the unfamiliar surroundings. 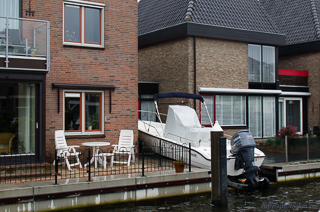 Along the way we passed a lot of breath-taking properties. Life here seems to be good! There were also quite some curiosities: Some of the strange things we saw was a highway passing under the channel we were sailing in.

Another peculiarity was that usually the channel was higher than the surrounding land, - they must really know how to make things watertight here!

We started the trip with filling up petrol, and discovered, that like in Germany credit cards are not welcomed! The explanation the shop owner gave, was quite worth noting: Eastern Europeans are stealing and copying the cards, therefore credit cards are nearly banned and the Dutch bank cards by default do not work outside of Holland!

Sure, instead of the police doing their job, it is much simpler put a ban on the bad bank cards. 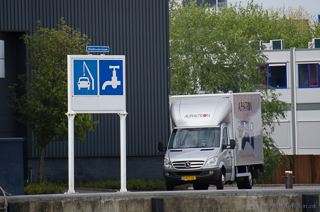 Here you can lift cars and get water 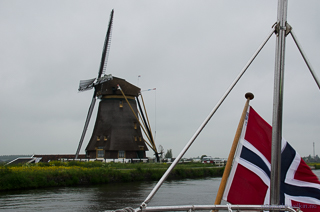 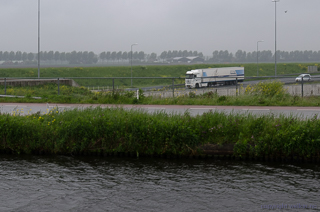 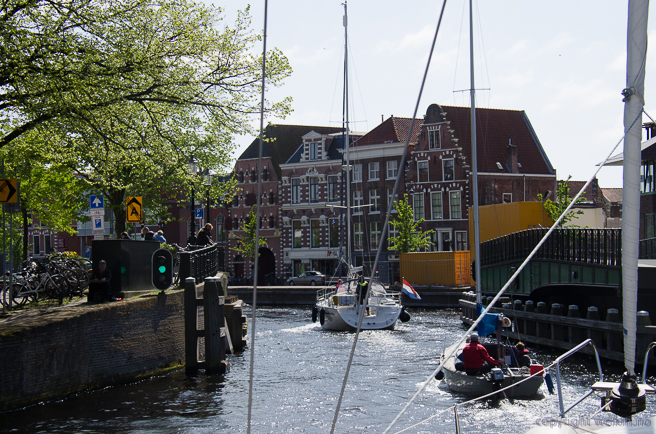 This is the Standing Mast Route - passing small cities and pasture and waiting for bridges to open. Above is Haarlem, an absolutely charming town without masses of tourists - at least so far.

Already at the second bridge we had to wait 2hours and 45 minutes for it to open - after 10 bridges and 2 tolls we lost count and just enjoyed the ride.

In Harlem we used the waiting period of 2 hours to explore the town. Finding a post office here, was quite a challenge, as the majority of the people we asked, did not know where it was. 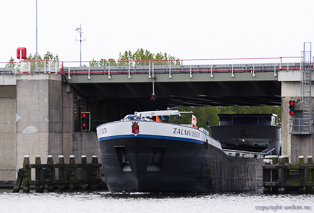 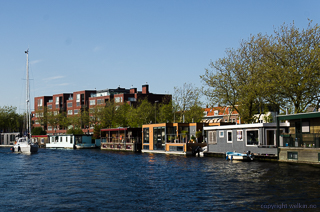 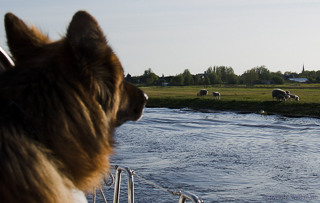 If only I could get to them  - then I wouldn't have to eat this dry pellets I don't like!

In the end we picked the closest harbour and  moored alongside in the city of Lisse.d The harbour master arrived on bike and the fee was again below 20€, including internet and electricity.

We arrived late and left early and therefore had no time to explore the town. 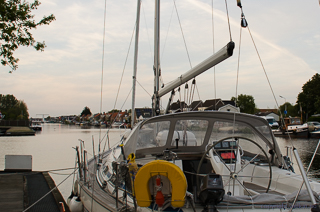 Alongside in the channel by Lisse 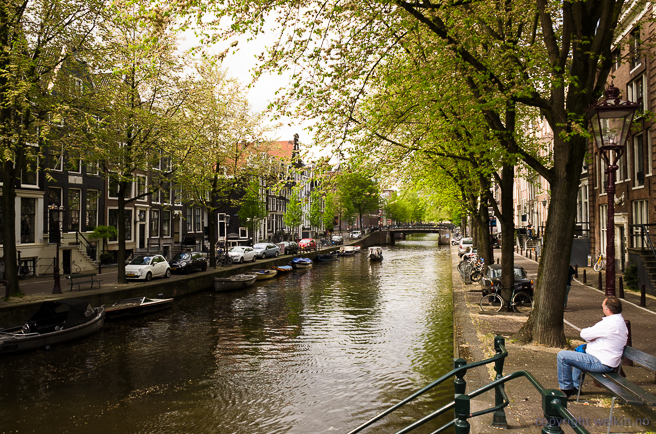 Mandatory picture from the channels in Amsterdam.

When we entered the tourist office in Amsterdam this morning, we discovered, that we were not exactly the only once visiting the city today. The queues were so long, that we opted for buying a map at a machine and of we went.

Without doubt, the old city of Amsterdam has kept its charm and even the masses of tourists, which were running around with their noisy trolleys or maps or smartphones in hand, and therefore easy to spot, could not ruin it. But how must this feel for the locals? Having their lovely home city overrun by foreigners and having to deal with the noise and the waste left behind and high prices at bars and cafés? Empty bottles of alcohols were left standing around at each corner!