We woke up early this morning because of the noise from a 35 knots gale. The wind and the seas calmed down a bit in the morning, so we set sails for the Barents Sea and the North Cape. 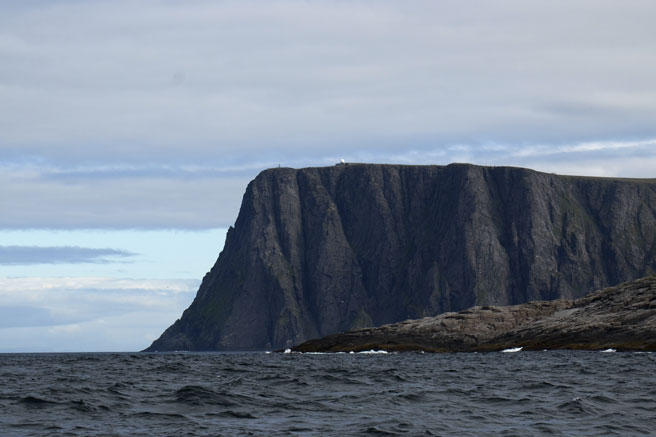 For those who don't know how far north this is; we are now north of Alaska and most of the North-West Passage between the Bering Strait and Greenland! 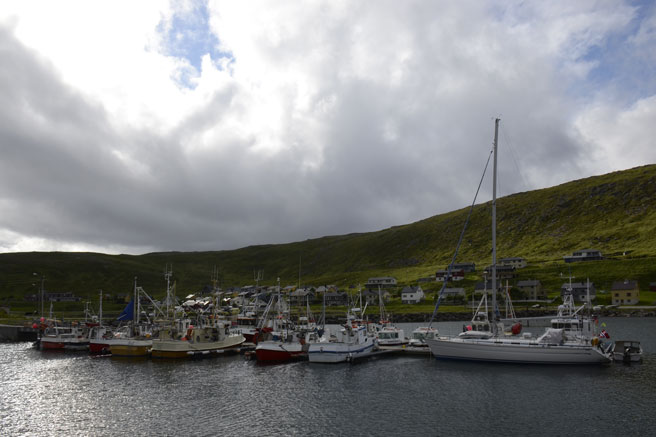 After the North Cape we could turn south a bit, well about 5nm, to the northernmost fishing village in the world Skarsvåg. It is unbelievable that in this harsh climate - there are no trees growing wild here - the fishermen from this village go out in their small boats and fish in the Barents Sea the whole year!

The city was suddenly crowded with tourists - a cruise ship had arrived, so we left the harbour to fill up diesel and water. After motoring just 4-5nm away from Hammerfest, the first mate spotted dolphins close by the boat. 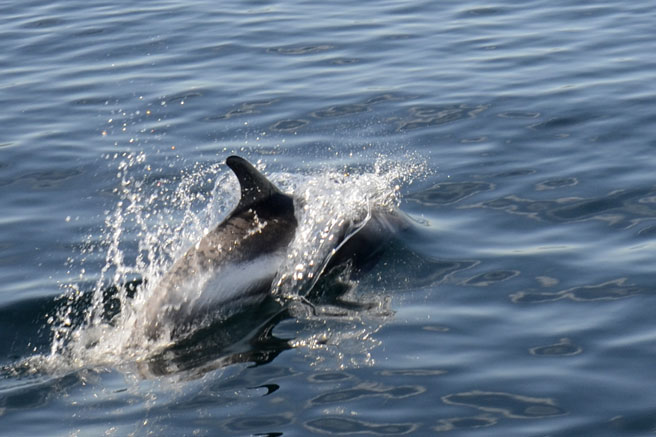 This time it was two White-Beaked Dolphins! 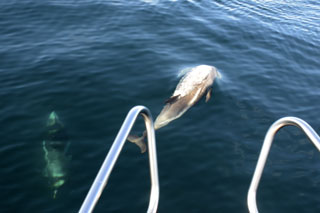 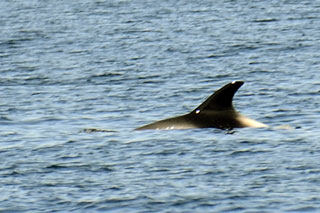 At first they both swam around the boat and under it! After a while the largest dolphin, with a more pronounced bright spot behind the dorsal fin moved away from the boat, but kept a fixed distance. 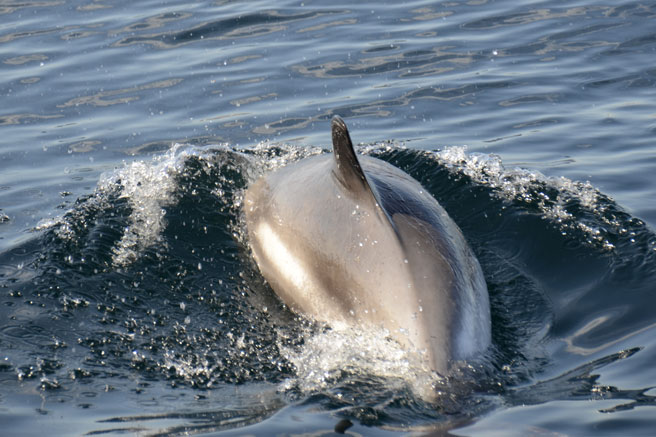 The smaller dolphin stayed with us and played for about 20 minutes! 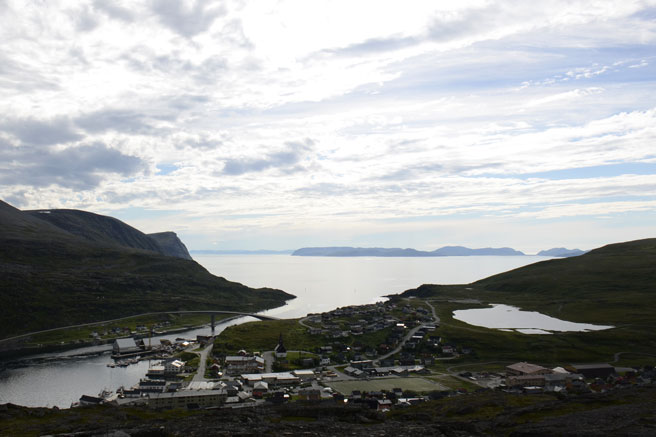 Absolutely no wind today, so we had to motor all the way to Havøysund, but with good help from the current - we where doing more than 10 knots over ground at times! It was sunny and relatively warm during the whole leg and we even managed to get a walk up the local mountain and back to the boat before it started to rain. We are tied up at the end of the pontoon in front of the big grey building.

The fog lifted, but the wind was weak in the morning. It increased a bit, but due to a blockage in one of the toilets, the whole day was spent fixing this. So not much sailing today!

In the evening, when the blocked tube was finally cleaned and remounted, we got a new blockage! Luckily we have another toilet! 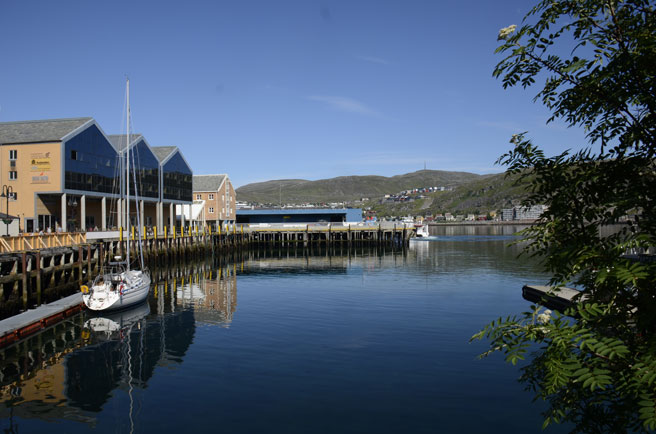 Here we are lying by the visitors' pontoon in the centre of Hammerfest. There is power available, but no water. Diesel and water are just across the bay.

Not much wind today, just a couple of hours under sail crossing Kværnagen fjord and out towards Lopphavet.

Not much of scenic views either! 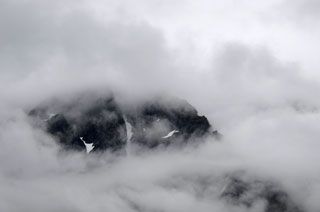 From time to time the fog lifted a bit to reveal some of the mountains, but even the beautiful Lyngen fjord was hidden in the clouds 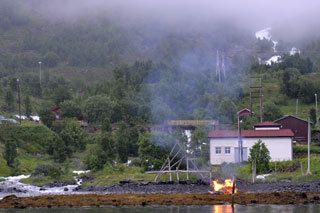 The midsummer night's bonfire was lit for us in the harbour when we arrived, but with heavy rain and low temperatures the evening was spend watching a movie! 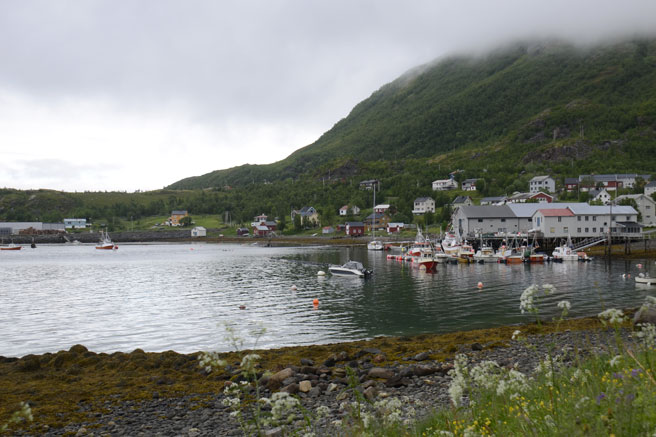 The harbour of Bergsjø. We are tied up to a tiny floating stage, with permission of the owner. In west wind the harbour is exposed to swelling!

After stocking up supplies, we left Tromsø heading out Grøtsundet into Ullsfjorden. No wind today, so the iron genoa did the job.

The alps of Lyngen. 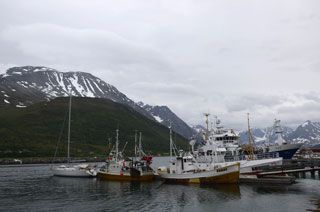 Welkin moored among the fishing boats. The harbour is well sheltered and there is also a floating stage for smaller boats. 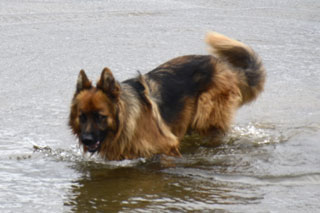 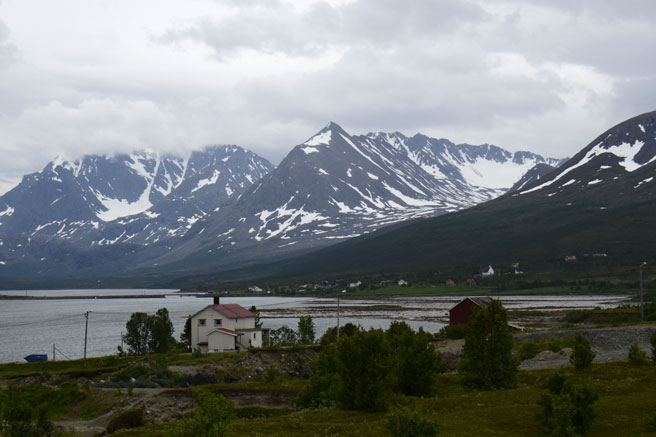 View of Nord-Leangen towards Kvasstinden 1011m (the pointed peak), one of the many mountains in Lyngen.

The deckhand left early this morning and while waiting for the first mate to arrive this evening, some maintenance work needs to be done. 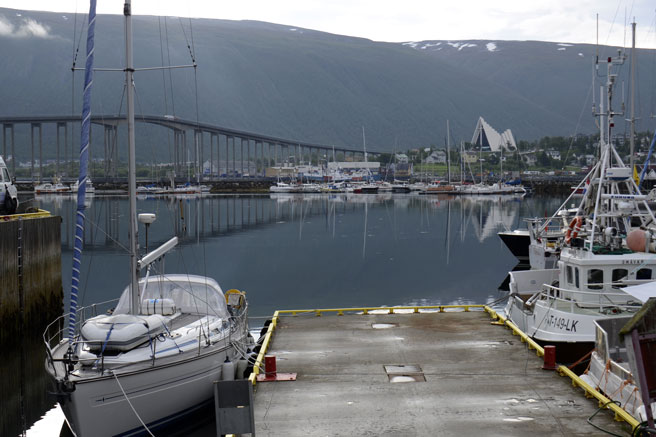 Moored in the centre of Tromsø, with the Arctic Cathedral in the background

Overcast and no wind navigating the currents by engine until we could set the sails on the second half towards Tromsø. 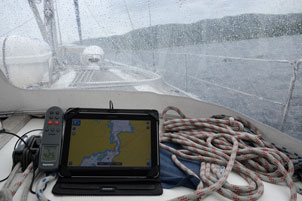 The captains new navigation position under the sprayhood. Perfect for a wet day! 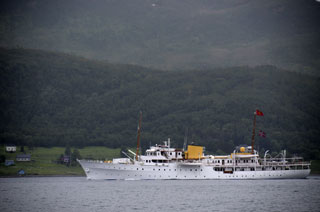 The most exiting view today; The Royal Yacht HNoMY "Norge" on its way to Sommarøy.

Lazy sailing at the beginning, but after a couple of hours the wind died away, and the rest of the leg we had to use the engine and just enjoy the scenery! 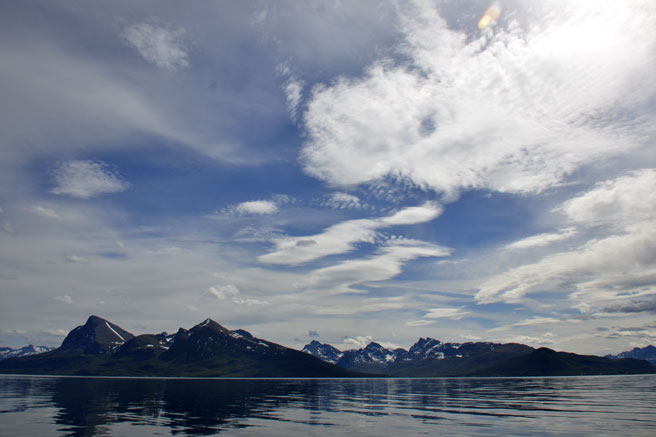 Snow covered mountains - we are getting further north! 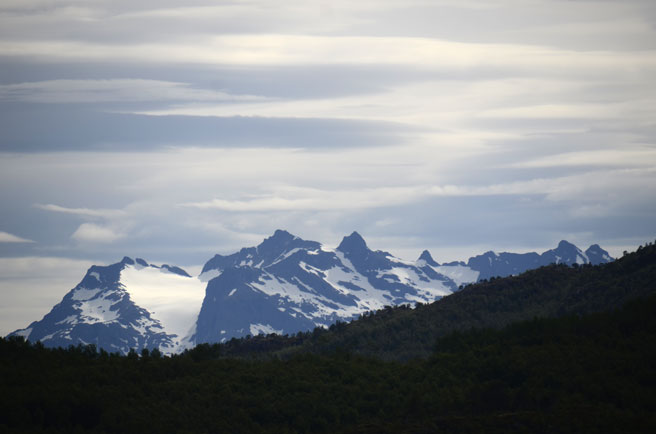 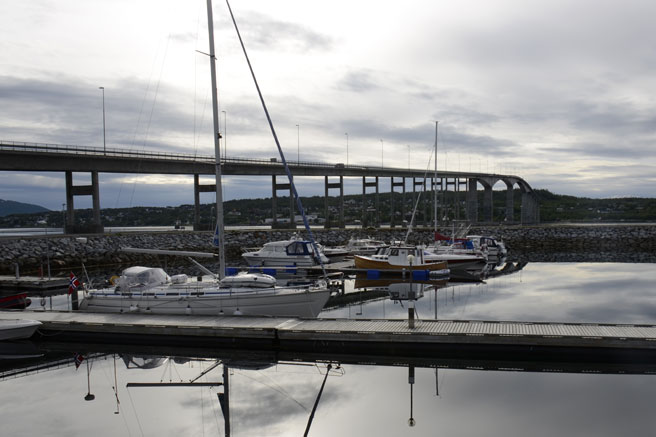 The Finnsnes guest harbour is just 15 min walk north of the city centre and well protected from the currents outside the breakwater.

Lofoten is group of mountainous island stretching more than 200km out from the mainland. Today we could see all 200km of it; use the scroll bar! 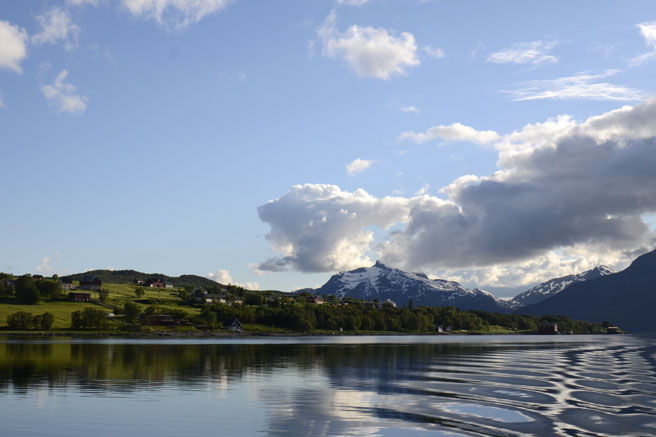 Above; Tjeldsundet after the rain stopped.

Another sunny day! We crossed Vestfjorden in a nice W breeze, but when entering Tjeldsundet we got a little bit of rain and the wind disappeared. The current in the sound was with us and we made good speed through it - up to 10knots over ground.

After more than 12 hours underway we could tie up to the floating stage in Harstad. No wind or waves at night, so the swelling was moderate!

The harbour is to the right of the ferry port, just below the ski jump. 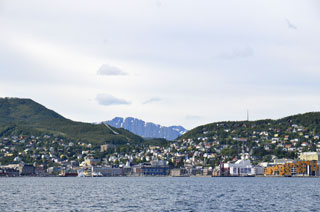 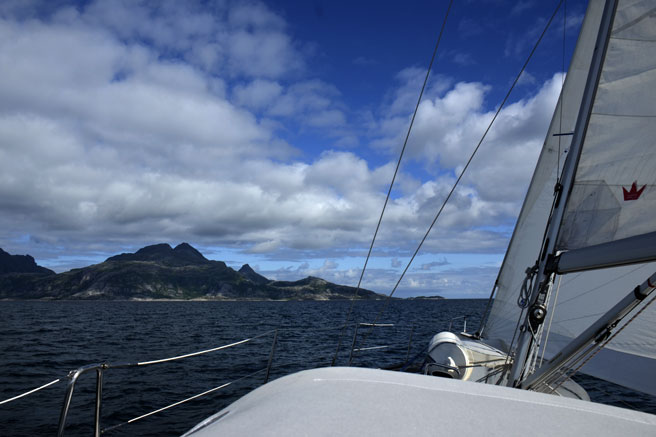 Finally under sail! Started off with NW 15-18knots wind reaching past the island Landegode, sunny, but still fresh. The wind decreased in the afternoon but an insistent deckhand made sure we sailed all the way to the guest harbour in Skutvik - even when it took us 12 hours! 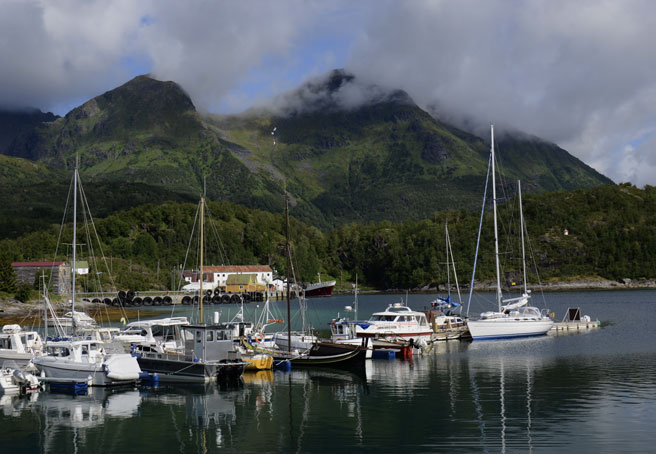 The 30m long guest pier is well protected behind a breakwater and has both water end electricity. In the background the quay for the ferry. 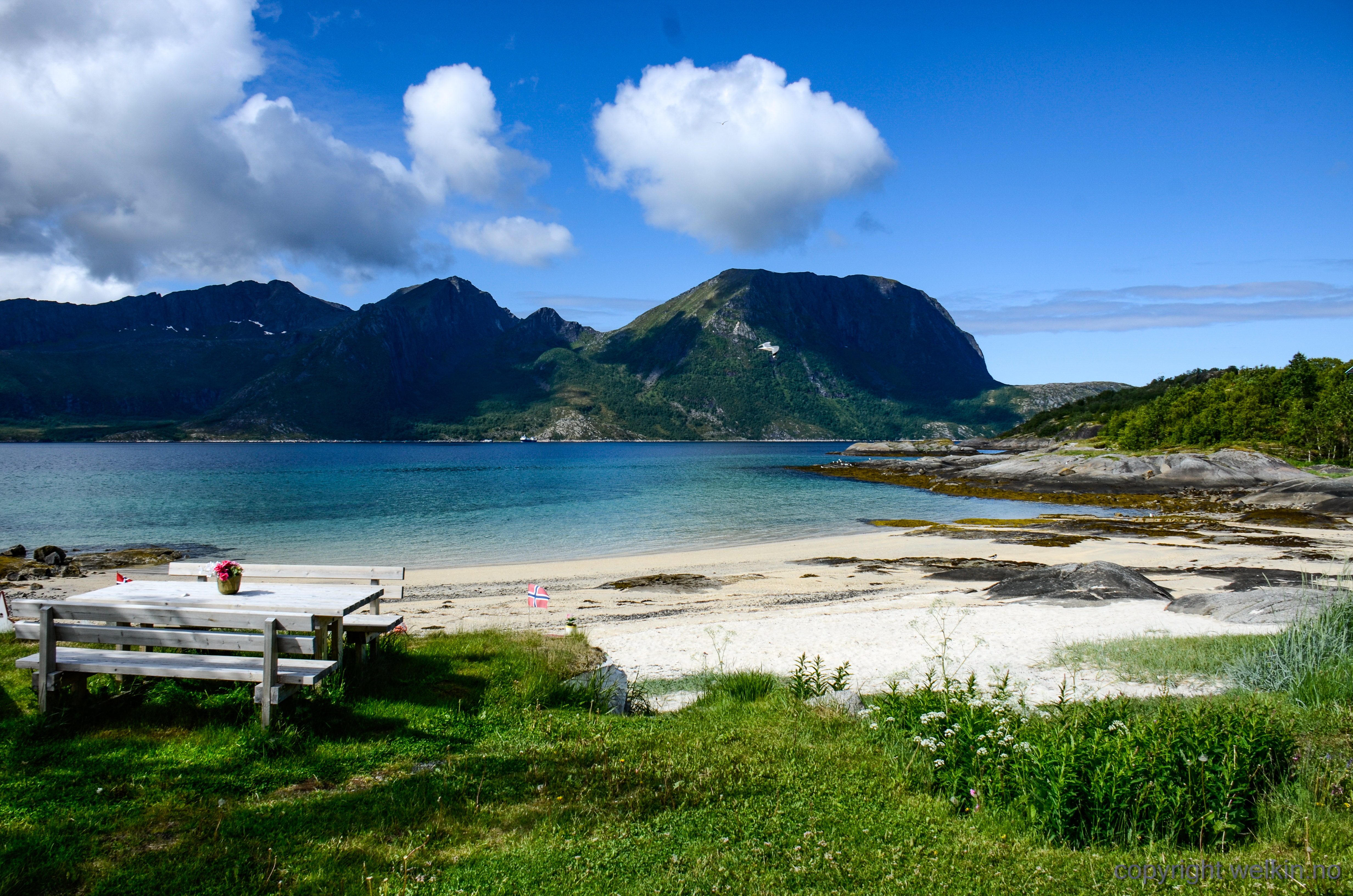 200m from the harbour, in front of a small pension, is a sand beach.

This Loch Ness monster visited us at midnight - well it's actually a harbour seal!

This oystercatcher nested just 10m from the pension!

The two eggs are well camouflaged and easy to step on!

The deckhand arrived today, just in time for the last preparations - putting the sail up and inflating the dingy. Only a little bit of shopping is left for tomorrow morning before we leave.

We are now in the land of the midnight sun! (picture taken at 2200 hours!) 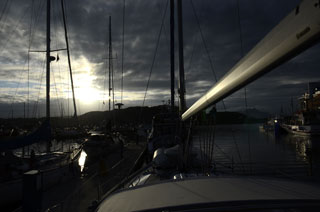 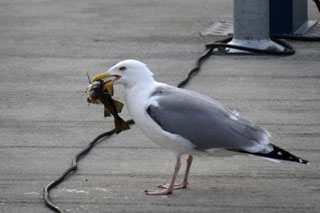 Just had to bring this picture of this seagull which just caught a tiny cod.

Arrived Bodø by plane the 10th of June, spending the time preparing the boat.

The fine sand on the shipyard had during the winter found its way into the boat and a major cleanup was necessary!

The deck was cleaned and the hull polished.

The last thing on the list was to check the engine and a couple of hours before launching the boat on the 14th, the ignition key was turned - nothing happened!

A quick check of the start battery during load showed 5 volt! Luckily the shipyard had a suitable battery that was quickly installed and the engine sprang to life on the fist try! The old battery was 13 years old - so I guess it had served its time!

Below: Finally the boat could go in the water! 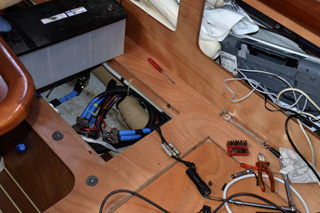 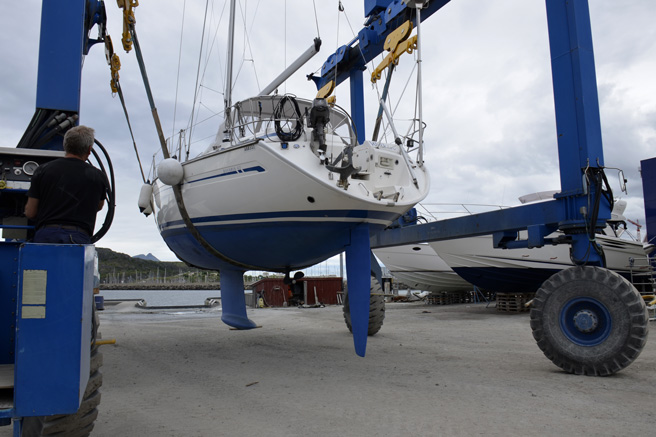