The harbour days in Ålesund were spent maintaining the boat and visiting friends & family.

A weak and very variable wind made us motor all the way to Ålesund and just before entering the harbour we were welcomed by rain - which is quite normal - the captain was born in this town of changing weather!

We sailed with a nice breeze from NE to Julsundet where the wind disappeared and pilot whales appeared! There were 10-15 family groups and many boats were out to watch them. 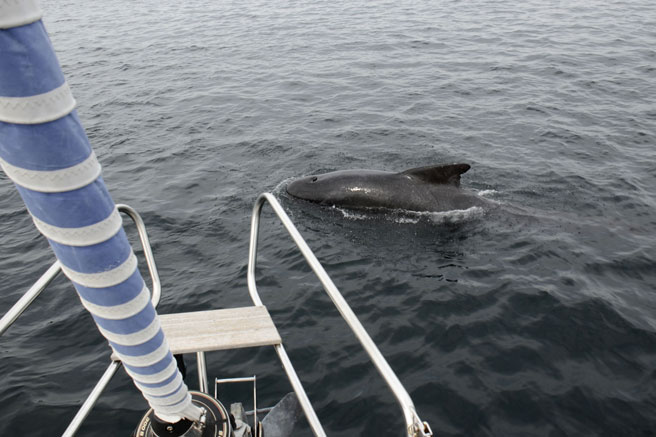 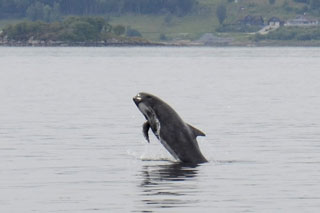 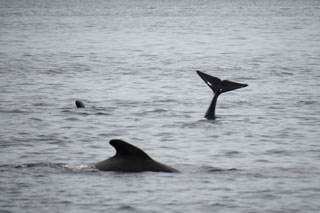 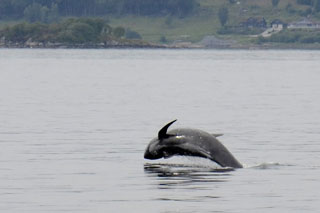 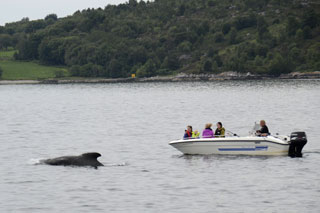 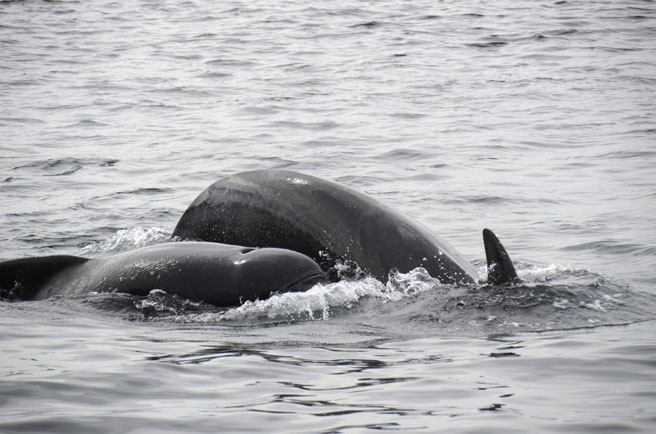 After watching the whales for an hour, we continued to Molde to drop off two of the crew that where heading back to Trondheim. The evening was spent in pleasant company with family! 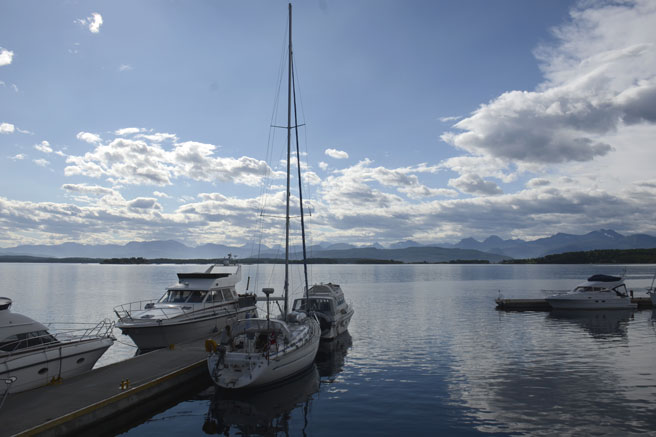 Molde guest harbour is exposed to swelling when boats are passing.

No usable wind today, so we had to motor across a very calm Hustadvika to the old fishing station at Bjørnsund. The captains grandfather were born on this island and took the name Bjørnsund when he left the island. 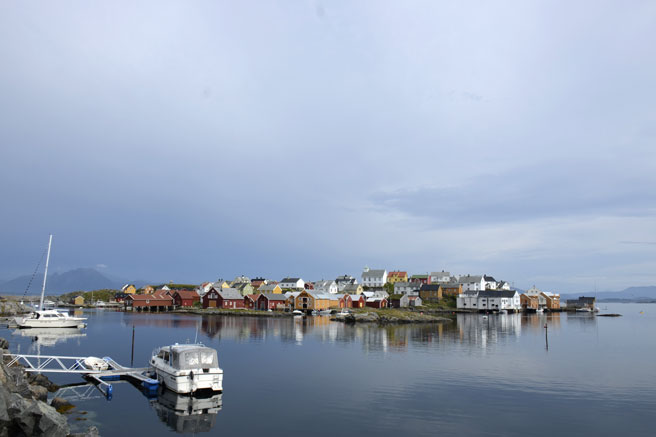 There are 3 guest pontoons; two along the mole (left in the picture) and one in front of the main quay (far right). The whole crew went on a historic walk, aided by locals, (most of them turned out to be related to the captain) we found out where the captain's grandfather and great grandfather were living. 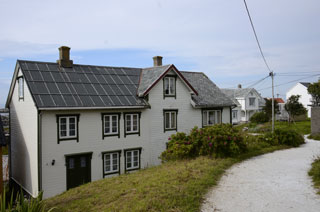 The house where the captains family were living. 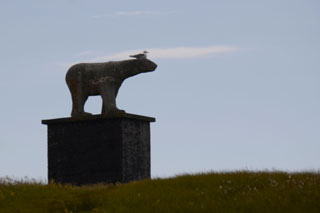 The story tells that the island got its name because an polar bear once drifted ashore! (Bjørn=bear sund=sound) 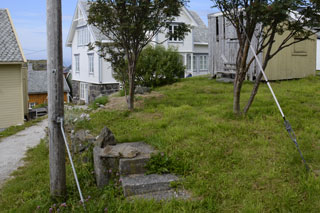 This is where the barn ( called Sporsløa) was standing - now only the steps is left. 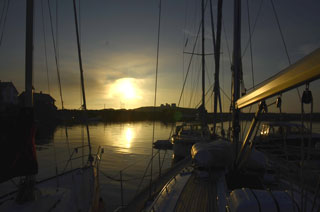 The evening was spend playing guitar and singing, and for the second time this summer we could eat out in the cockpit!

From Veidholmen we took the fairlead SW of Smøla, the area outside the fairlead is almost impossible to navigate due to the countless skerries and shallows.

Once out of the fail lead we had nice wind and could reach directly to Kristiansund. 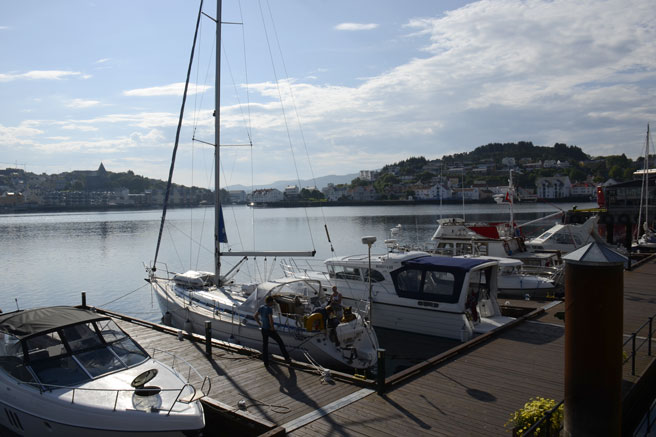 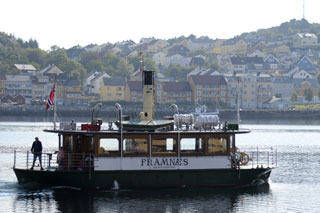 Above; The guest harbour in the centre of Kristiansund is exposed to some swelling due to all the boats passing, there is however a guest harbour at the boat club a bit to the north.

We picked up an additional crewmember arriving from Trondheim by boat, so we have now a crew of 3 deckhands and 2 dogs in addition to the captain.

Left; The new build of the steamer "Framnæs" that serviced the 3 islands of Kristiansund between 1917-1951.

Started of in fog, but when we passed Titran, it lifted and a clear sunny sky emerged. Entering the narrow fairway north of Veidholmen is always exiting.

Entering the narrow fairway north of Veidholmen is always exiting, but we wouldn't enter it with heavy seas from the north as it is quite shallow. There is an approach from the south also.

The well protected harbour at Veidholmen- There are two guest platoons; one left in the picture and the other one right.

We got an exclusive after-hours tour of the Sanden property. Left is the kitchen, which is just like it always have been, since 1708! The lady in the picture is from Eckhoff family that has lived in the house the past 300 years.

In the last week we have missed at least 3 festivals by a day, but today a blues festival started here, and in the Vågarbrygga restaurant next to the boat, we joined the first jam session into the the early hours. 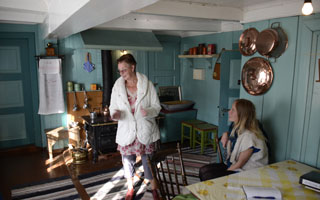 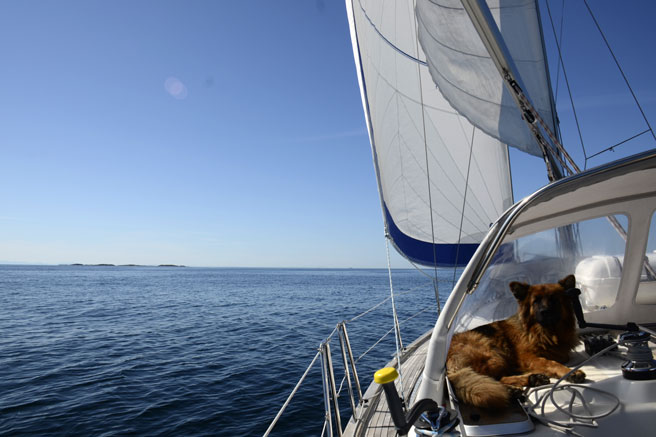 Calm sailing, still broad on the beam and still sunny... 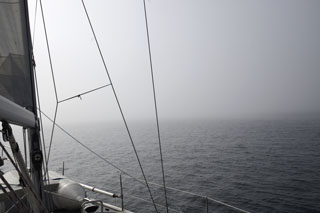 During the day the fog banks got more and more frequent. 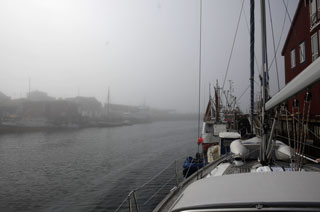 When we reached the harbour the fog was permanent and didn't lift again..

We moored at the pontoon at Sjøblomsten restaurant. The innermost pontoon has only 1.3m dept, the one further out had just enough depth. Outside the grocery store on the S side of the harbour there is another guest pontoon. Late afternoon the second deckhand arrived by boat from Trondheim. 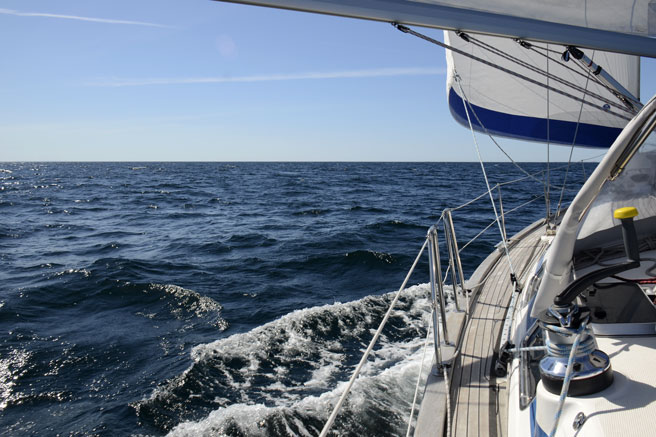 Good sailing today with sun and the wind broad on the beam, heading for the small fishing station Halten about 50km offshore. 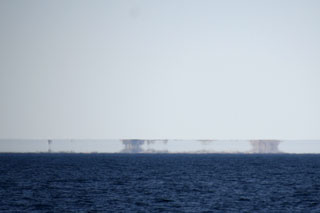 Half way across we could see Halten as a Fata Morgana. 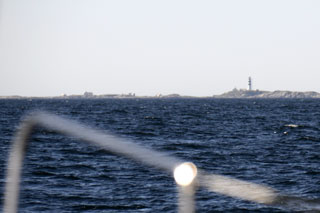 In the end the real island emerged over the horizon. 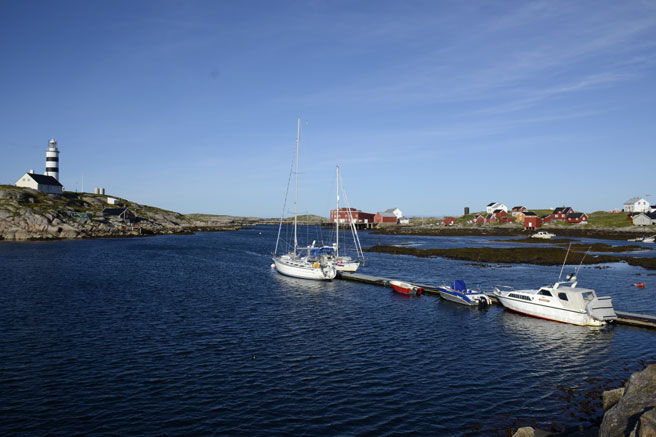 The fishing station is now deserted, except for holiday visitors. The old grocery store is kept as a museum, along with a restaurant that this year got a permit for selling alcohol ( the red and the white building in the middle. 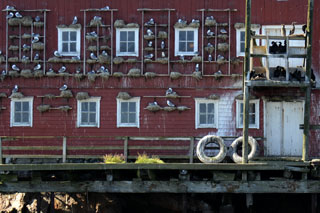 The seagull condominium and the Cormorant Terrasse on Halten. 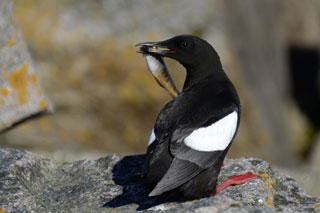 The Black Guillemots are showing off their catch.

Sun and 37 degrees Celsius! - Yes, that's true; we have now gotten our core body temperature back to normal again! Great sailing today - broad on the beam and out in the open! 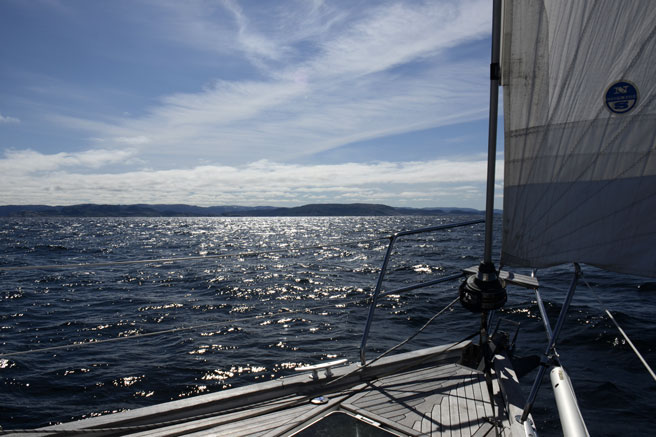 Bessaker guest harbour is not very big, but has water, power, diesel, grocery store and restaurant - all on the quay. 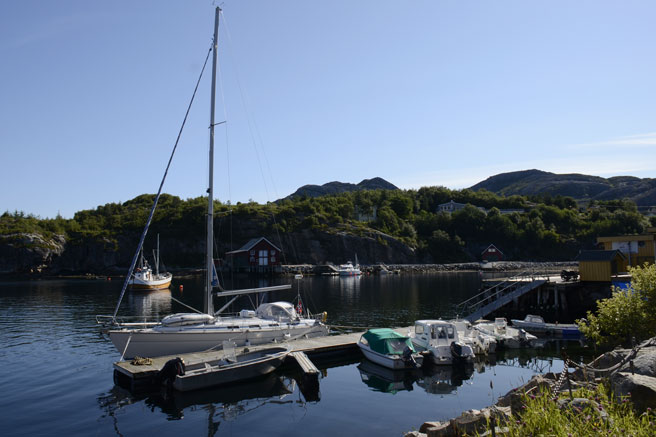 The first mate left this afternoon and we headed out the fjord and we even got a glance of the sun; that's the bright looking spot on the top left.... 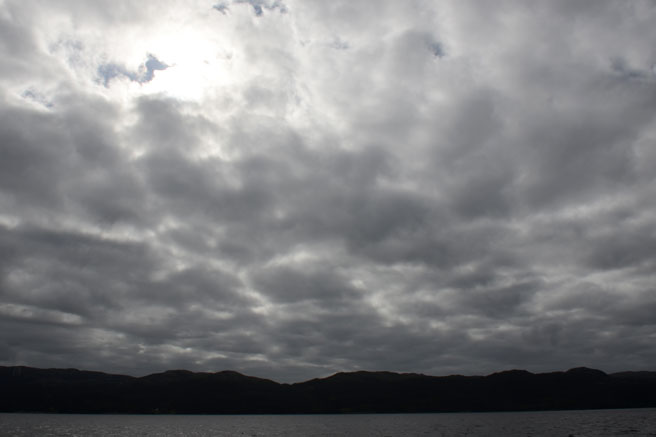 The harbour has unfortunately lost the restaurant - the chef has retired - they are trying to find a new one, but so far no luck. 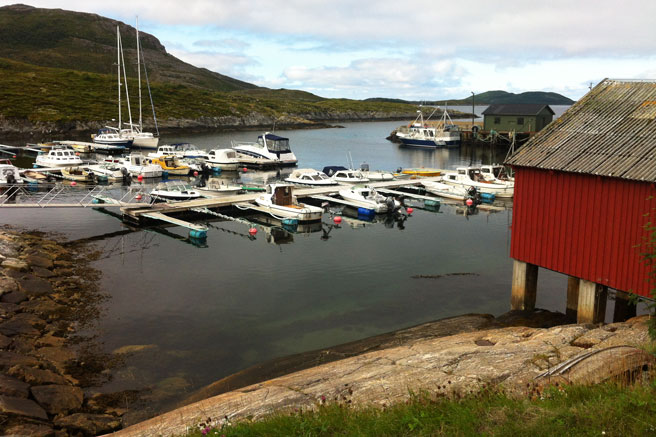 Gale and 3 meters waves on Folla, at least it was not raining that much - instead we had the spray! It was calm as soon as we got out of Folla and into Namsenfjord.

Normally we wouldn't go this far into the mainland, but the first mate is leaving for Canada tomorrow and communications are easier from here.

We tried the harbour of the local boat club - we saw at least 5 sailing boats moored there - so we thought it had been dredged, but as soon as we got past the breakwaters, we hit ground and got stuck in the mud. Heavy use of engine and bow thruster got us off and we headed for the public guest pier - unprotected and in bad need of repair. There was however water, but a note told us that the power was not working.

A parting shot of Namsos. The public harbour is in the middle of the picture the boat club is to the left. 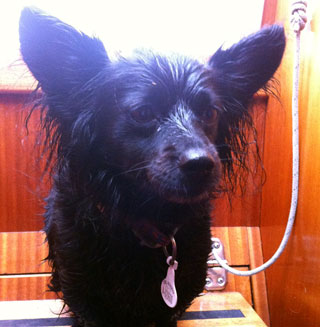 Gee!!!  I'm happy to finally get below deck!